Andalucía is famous for a lot of things. However, its wines from beyond the Sherry Triangle are relatively unkown!

Sherry wine is the shining light in the South, streaking ahead of the rest in terms of fame and notoriety. Most of you reading this will have tried a glass of sherry at some point in your life or perhaps used it to cook with. But even sherry, until recent years was seen by many as a cheap cooking wine or remembered as that dusty old bottle, tucked away at the back of grandma’s drinks cabinet!! Nowadays, Sherry is experiencing a rebirth, appearing in the finest restaurants and creating fun fusion food pairings with cuisine from around the world.

But what about other Spanish wine regions in Andalucía?

The triumph of Bacchus by Velázquez

The History of Andalucian Wine

But to begin with, we need to look at the history of wine in Andalucía. It is believed that wine production was first brought to Andalucía by the Phoenicians, around 1100BC, beginning in the province of Cádiz. We know for a fact that the Romans produced ‘Ceretanum’ wine in Jerez, to be traded across the empire and that in the Roman city of Acinipo, near Ronda, local coins were branded with bunches of grapes, highlighting the importance of wine production at the time. But we could say that Andalucia’s wine golden age took place during the XVI and XVII centuries, coinciding with the discovery of the America’s and the subsequent trade boom across the Atlantic.

Strangely enough, the dreaded phylloxera which decimated European wine production, arrived in Spain via the port of Málaga, totally destroying the wine industry in Andalucía as well as the rest of Spain. From this moment on, in a desperate fight for survival, winemakers transformed their lands to produce different crops, allowing wine production to be forgotten. For decades’ it lay almost dormant in the region. Thankfully, in the twentieth century, winemaking slowly rumbled back into life in different areas of Andalucía and today we proudly boast an ever growing diversity of wine.

A vineyard on the ouskirts of Ronda

We want to tell you a bit about 3 of them, Sierras de Málaga, Granada & Montilla-Moriles. 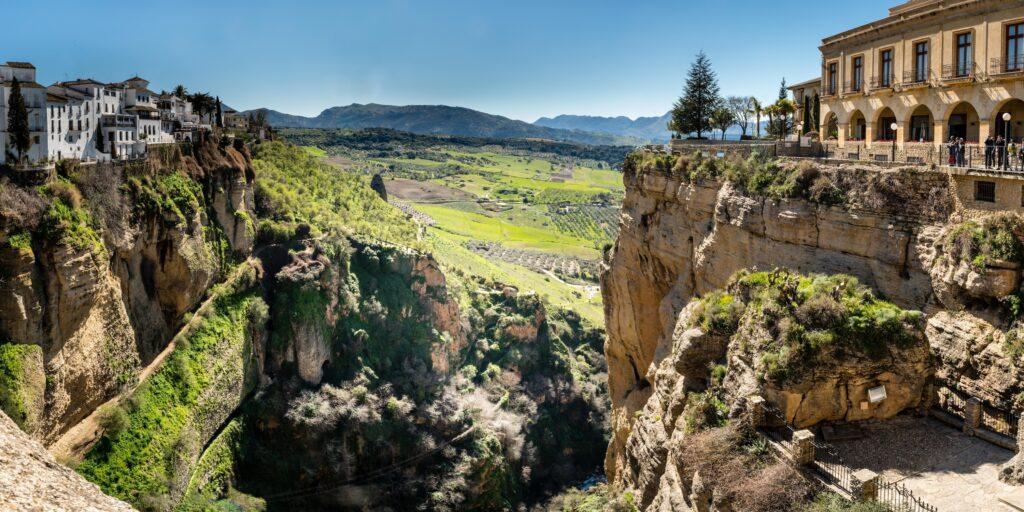 In the past half century, many wineries have sprung up in Málaga province, focusing on red, rosé and white table wines. The DO (denominación de origen) of “Sierras de Málaga” was created to try and distance their image from the traditionally sweet wines of the DO “Málaga”. The DO is divided into 5 sub-zones, and we are going to talk about Ronda. The vast majority of the wines produced here are red wines. Ronda’s geography, in Southern Spain, is a big contributor to the character of its wines. But the altitude of between 700m and 1000m means that nightfall brings with it a big drop in temperatures, allowing the grapes to recover from the strong sunshine. In winter, temperatures fall well below freezing, allowing a cleansing of the vineyard and possible pests. You wouldn’t say that Ronda is known for a particular grape. In fact, each of its more than 25 boutique wineries, have very different micro-climates and often use very different grape varieties. Tasting wines from Ronda is a fun and often surprising experience! Very different from the “safe consistency” of a region such as La Rioja. Here the summer heat ensures the wines are very bold and expressive. You’ll find young, fruity reds as well as complex, powerful reds, mostly blends, that have spent plenty of time in barrel and bottle before going on the market. In fact, much of the winemakers energies here are employed in trying to harness the organoleptic power of the flavours and tannins. If you’re an adventurous wine lover who enjoys expressive tipples, Ronda is just the region for you!

One of the main protagonists in Granada wine making is the Sierra Nevada mountain range. More than half of the regions vineyards are above 1000m altitude. In fact, this area has the highest vineyards in Europe,  over 1360m above sea level. The success of these vineyards in producing excellent grapes is also down to the fact that they are in the area of Europe with the most hours of sunshine. Ultraviolet rays are responsible for the fixation of polyphenols which increases the amount of resveratrol in the grapes. This means that the wines are not only more complex, but they are also healthier! Most vines in Granada province are planted on slopes that are too steep and inaccessible for machinery, meaning workers and mules perform most of the grunt work, from sculpting the slopes into steps and tiers, to maintenance and harvest. Due to the topographical challenges posed by the area, Granada wine making is a fine art and produces some excellent red and white wines. International grapes, such as Chardonnay, Sauvignon Blanc, Cabernet Sauvignon, Shiraz, Merlot & Pinot Noir all do very well here. As do the autochthonous grapes such as Vijiriega, Pedro Ximenez, Palomino, Tempranillo & Garnacha. Based on the above, we can only hope that if you have the pleasure of visiting Granada in the future, you’re able to try some of their local tipples!

The third DO we are going to talk about has very little in common with the previous two! Montilla-Moriles is located in the heart of Andalucía, slap-bang in the middle of the triangle made up by Sevilla, Córdoba and Granada. This part of Andalucía is exceptionally hot and dry, with temperatures in summer easily exceeding 40ºC. The soil here is similar to the sherry triangle, “Albariza”, a white, chalky, limestone soil which is able to store rainwater like a sponge and then bake itself shut in summer to avoid evaporation. In fact, Montilla-Moriles is like a scorching Sherry Triangle in itself, with no sea breeze or cool coastal temperature to give respite to grape and plant! But, as is so often the case, wine makers of the region are able to use all of these factors to their advantage. This is mostly a white wine region, growing grapes such as Airen, Verdejo, Macabeo and Moscatel. But the true champion here is the Pedro Ximenez grape. A large quantity of its production after harvesting is laid out in the sun to dry like a raisin. This increases the sugar content, preparing it to be sold to wineries in the Sherry Triangle to make the famous PX dessert wine. But Pedro Ximenez is also used to make Finos, Amontillados and Olorosos in Montilla-Moriles. Remember, these are NOT Sherry wines, as they aren’t from the Sherry Triangle. The intense heat of the region means that the grapes that are fermented can reach more than 15º alcohol without needing to add alcohol to fortify in the case of Fino de Montilla Moriles. Another difference from Sherry is that Montilla-Moriles wines are often aged in “Tinajas” (ceramic vats). If you’re a wine lover, looking to discover original and lesser known wine producing regions, Montilla-Moriles will blow you away as one of the most underrated spots on the planet! 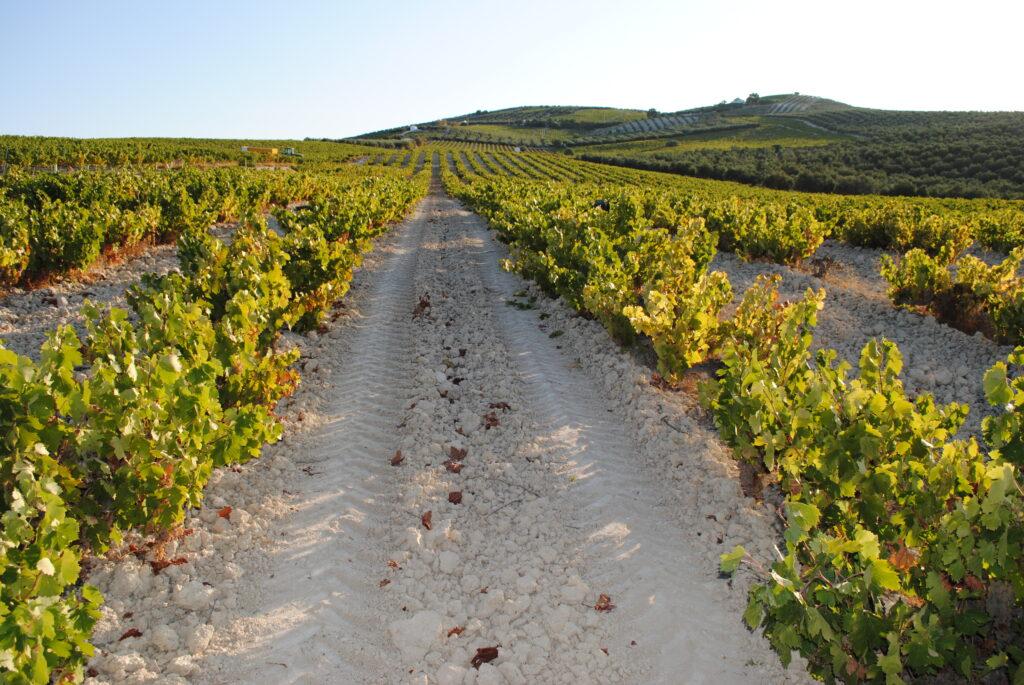 If you’d like to learn more about Andalucia’s wines, or you’d like us to arrange for you to visit some of its finest wineries, please don’t hesitate to ENQUIRE HERE

My Tweets
We use cookies on our website to give you the most relevant experience by remembering your preferences and repeat visits. By clicking “Accept”, you consent to the use of ALL the cookies.
Cookie settingsACCEPT
Manage consent

This website uses cookies to improve your experience while you navigate through the website. Out of these, the cookies that are categorized as necessary are stored on your browser as they are essential for the working of basic functionalities of the website. We also use third-party cookies that help us analyze and understand how you use this website. These cookies will be stored in your browser only with your consent. You also have the option to opt-out of these cookies. But opting out of some of these cookies may affect your browsing experience.
Necessary Always Enabled
Necessary cookies are absolutely essential for the website to function properly. These cookies ensure basic functionalities and security features of the website, anonymously.
Functional
Functional cookies help to perform certain functionalities like sharing the content of the website on social media platforms, collect feedbacks, and other third-party features.
Performance
Performance cookies are used to understand and analyze the key performance indexes of the website which helps in delivering a better user experience for the visitors.
Analytics
Analytical cookies are used to understand how visitors interact with the website. These cookies help provide information on metrics the number of visitors, bounce rate, traffic source, etc.
Advertisement
Advertisement cookies are used to provide visitors with relevant ads and marketing campaigns. These cookies track visitors across websites and collect information to provide customized ads.
Others
Other uncategorized cookies are those that are being analyzed and have not been classified into a category as yet.
SAVE & ACCEPT
Powered by